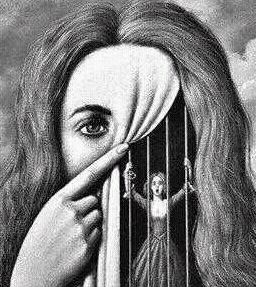 Pulling into the apartment complex after a full day, I noticed the trail of someone’s laundry or clothing strewn through the parking lot. It was still cold and damp out, but spring was finally making itself known after another blustery Illinois winter.  Clothing, boxes, a couple of books, shoes, etc. were tossed along the walkway, in the grass, and in the parking lot. In the passenger seat of my mother’s car, I peered through the window staring hard at each article of clothing.  The piles of belongings led up to the main entrance of the building.

Thank God being fifteen was coming to a close soon. The last two years had been flipped upside down and I was ready to close the door on that chapter. Still,  this new life felt like someone else’s. I was reeling emotionally from being disowned by my father, thrust into my mother’s apartment with nothing but a backpack’s worth of stuff and adjusting to the start-stop-start of two different high schools.  Navigating living without my younger sister was also a shock to the system. There is a vast difference in going from having a sister to share your space, things, and thoughts with – to being by yourself.

For the last year and a half,  there was always some kind of drama lurking. Walking on egg shells became an honed skill. Just keep everyone happy and life would be OK. Don’t rock the boat. Nothing seemed to really bother me anymore-things could always be worse. Now that I was with my mother, there was no fear of what new false accusation or punishment awaited me. I believed that being out of my father and stepmother’s physical presence allowed me safe refuge from their mental games.

Mom worked long days, usually grabbed a cocktail with her gals after work, and typically got home late. It was odd to be alone in the loud quiet of the apartment, but for the first time in awhile, there truly was a feeling of sanctuary.

I would walk places to kill time, lie on the couch and actually relax,  hang with friends in their cars driving to the mall, the movies, and various fast food places since everyone was eager to drive with their freshly laminated driver’s licenses. Sometimes I’d listen to mix tapes, play with my dog, stare at the ceiling and daydream about all the things I  wanted to do with my life now that I had escaped my  teenage prison. The pressure, the anxiety, the constant nagging, and overblown reactions were over-and I bathed in that relief. In the beginning, the first few weeks of freedom felt like a dream; foggy, surreal, numb. It felt as though at any moment it could be ripped away from me, so I had to be vigilant and careful- it just wasn’t clear what I had to be vigilant and careful of. It was like being on a heightened sense of alert-just in case the rug got pulled out from under me. I would never go back. Never.

One evening just after my mother had walked in the door from work, the phone rang. It was my sister. I had been looking forward to hearing her voice, I missed her so much and these first few weeks without her were tough. But the voice on the other end was troubled, upset.

She explained that we would be unable to see one another for an indefinite period of time.

Being kept from my own sister felt like a cruel and unfair punishment. In the back of my mind I had wondered if he would keep finding ways to hurt me or break me down even though I had escaped the confines of his self-proclaimed “dream house”.

She went on to explain that we could not see each other because Dad’s home had been vandalized.

Vandalism? How did that have anything to do with us seeing one another? I didn’t understand. And then all at once I did understand. Like a knob cranked all the way to blast, the realization of the situation had all but caused me to throttle through the roof of the apartment on adrenaline alone.

Vandalism. I wasn’t capable. Did they at least know THIS about me? Did they know anything about me? I had been accused of many insane things while under their roof. Here’s  a handful: doing and dealing drugs, dating a drug dealer,  being an alcoholic, a threat to their safety (they once told me they got a lock for their bedroom because they were afraid I would murder them in their sleep),  “stealing” food from the kitchen, a defiant juvenile worthy of military school for purposely smearing jam on the counter to make a “statement”, a mastermind manipulator, and the list of outlandish accusations and paranoid delusions could go on and on. Now I could add vandal to the list. I  had to laugh, there were just no more tears left.

My sister went on to explain they KNEW that I had done it because who else would do it? I had just been kicked out of their home, therefore to them it was the most obvious connection.

I asked what had happened.

My fury at the guilty until proven innocent verdict bubbled over.

Yet another unfounded accusation. I wasn’t even under that God forsaken roof anymore- and yet they were still able to get to me. The best way to describe how I felt was like being punched in the stomach over and over and over again.

It was then my sister shared another hurtful message from our dear father. As a result of my apparent vandalizing of their home, not only would my sister and I not be able to see one another, they would not be returning any of my belongings. I would be forced to keep just the backpack’s worth of personal stuff and that would have to be enough. Because this was MY unfortunate choice  to do this to their home, I would have to suffer the consequences.

And suffer I did.

Many months went by without seeing my sister. My mom had to purchase me new glasses, contacts, clothing, shoes, etc. since I was unable to get my things back and we hadn’t seen her in months prior to them dropping me off forever.  I had no clothes there.

Eventually, Spring came and along with that came an eviction notice. We’d have to decide where to go next and things were not looking promising on a beautician’s pay.

The car windows were cracked, and the cool spring air mingled with my mother’s cigarette smoke. We parked in our usual spot and got out of the car.  I can still remember the exact smell of the delicious wet dirt after the rain.   I took in the scene before me;  the walkway, the landing near the front door of the apartment complex, the parking lot. I cautiously walked over to one of the brown cardboard boxes that sat among the mess of items.  I lifted the tucked moving style folded flaps of the carton and looked inside.

The contents in the box were mine. I realized then that it was my belongings that were also part of the strewn items I had seen while pulling into the parking lot.  I felt the stinging at the backs of my eyes and resisted the urge to cry. While it wasn’t the way I had hoped to receive my belongings many months ago, at least I finally had them back. What forced the tears to flow regardless of my trying to hold them back and be strong,  was the hate-filled way in which they were returned to me;  as though someone had thrown them out the window of their car while driving by. My own father. What I would never understand was how he grew to hate me so much.

The small silver lining  was that my stuff had arrived just in time for our big move. I’d be going to live with family friends and mom would be staying with a friend for a bit. The plan was just for a month or two. She’d be saving up until she had enough money for us to get a place together again.

Through my lens as the child and now as the parent: False accusations can harm your relationship with your children. This was one of most hurtful experiences in my life and prior to that  experience, every single false accusation stung almost as bad. I’ll be able to apply this in the now and stop and think before accusing my sons of things with such certainty and condemnation.

Never-ending punishments and constantly reminding your child of the crime is overwhelming and maddening for them. I think we all need to remind ourselves of this when our kids are teens!