Now that I’ve been unemployed for two weeks, my days are filled in a different way. All the things I’ve put on the eternal back burner I can now take on and finish in my home.  Among the adult chores I can now tackle on the home front,  I’ve also enjoyed taking and picking up my kids from school and the extra hours in each day that I now get to spend with them. In the last week there have been some cool conversations and some not-so-fun ones with my sons.  There have also been some bonding activities I’ve tried to cram in each day since I’m a little kooky and always feel like when something good is happening it will soon go away. So I have been doing what I do best- squeezing in as much as possible. Sometimes the activities go well, sometimes they blow up, sometimes I have a talk with my kids and learn something when paradoxically, I am trying to teach THEM something.

On my first week home I let both my sons know Mommy would be picking them up from school and they no longer needed to go to their after school care programs.

My oldest pondered this for a long minute then said, “But Mom, I don’t want you to pick me up from school. If you pick me up that will mean Y is all alone at after care. She only plays with me. I can’t leave her like that-it’s not right. She needs a friend. So, like, no offense, but can I still go there and we can pick one day that you can get me right from school?”

I thought to myself -how can I refute this? He’s showing compassion for his friend and he has a really good point. This program is pretty amazing and it is extremely inexpensive for the entire year, and we’ve already paid in full up front. Most importantly, he unleashes all that pent up energy there because there are so many activities. I agreed with him that it was the right move for him 4 days out of the week, but that I will pick him up a half an hour to an hour earlier than usual.

For the last eight months I have put our youngest to bed pretty much every night. Long story short the four alarm meltdown when I don’t put him to bed lasts forever and cuts into the time he should already be catching his Z’s. My eight year old is beginning to get pretty sad about this because he misses this connection time with me. So my youngest surprised all of us by saying, “Mom, I want Daddy to put me to bed one night and then you do the next”.

Both me and J were excited to get this long awaited connection time. While lying there, we usually chat about life and other random things before he drifts off. While he was dozing, I pulled out my phone and started a task I’ve been putting off for a while -adding members to a Facebook group I’m the administrator for.  He peered over and asked what I was doing. When I explained, he sat upright, his voice upset. “You mean you don’t add everyone? What do you mean you decline some people when they try to join your group? That’s so mean. You’re MEAN. You should be including everyone or anyone who wants to join! I can’t believe you.”

Startled, but happy that my kid has an inclusive nature, I explained to him that my group is only for the county we live in and it isn’t relevant or useful to those that live in other states, countries, or even other counties. He would not let it go. He saw it as very black and white. If people want to join something- let them join. I realized no matter how many different ways I tried to explain to him how that isn’t how these groups work, I wasn’t going to win this argument. He went to bed steaming mad at me. Some things are hard to explain as a parent and I felt so crappy that this was our first night together having a nice chat and that it ended on this note. While upset that my kid was disappointed in me, I was actually happy that he got so worked up about something he believed in so firmly. Passion is a good thing.

My little guy wears a uniform to school. It’s a T-shirt and sweats basically. I bought two polos which are part of the older kid uniform just in case there was ever a day he needed to dress up for school.  Now he refuses to wear his T-shirt which is the normal uniform and only wants to wear the collared polo. He cries the entire way to school if I put him in the T-shirt. I tried the route of explaining to him that there is a mountain called Mt. Everest and that is also the name for our pile of laundry.  Mommy can’t always get to washing the two polos in time for school. He just cried harder. I just chalked it up to a bad couple of mornings because he’s not a morning person. Then came time for his older brother’s parent/teacher conference this week. We had no luck getting a sitter and ended up having to bring both kids with us. Before we left, E begged to wear a fancy shirt and a tie. He said he wanted to look his best for his brother’s conference. Insert me melting into a heap on the floor. I connected the dots right then and there. Looking nice is important to him. He wants to look his best at school – that’s why he had the fit about wearing the t-shirt vs the polo. Sometimes it takes us parents a minute to learn what our kids are really trying to say.

I told the kids we were going to have a screen free evening yesterday and make pumpkin pretzels for a gathering we’re having this weekend for Halloween. I thought it would be a fun activity in the kitchen for the three of us. Not. So. Much. The melted orange coating got everywhere and they just kept trying to eat it. Then they spilled half the M&M’s all over the floor and we had to throw them away. Each time I finished putting one on the tray no sooner would I go to place another down and the one I just finished had disappeared into one of their mouths. Can I tell you how frustrating this was? I drove 20 minutes away to track down the last two remaining bags of orange candy melts at Jo-Ann fabrics because every store from here to NY was out of them. Note to self and other moms- some baking activities are fun with kids. This one was not! We argued the whole time. The good news is- I had just barely enough and got ‘er done. Here they are in all their delicious and pretty hide-them-from-the-kids glory. 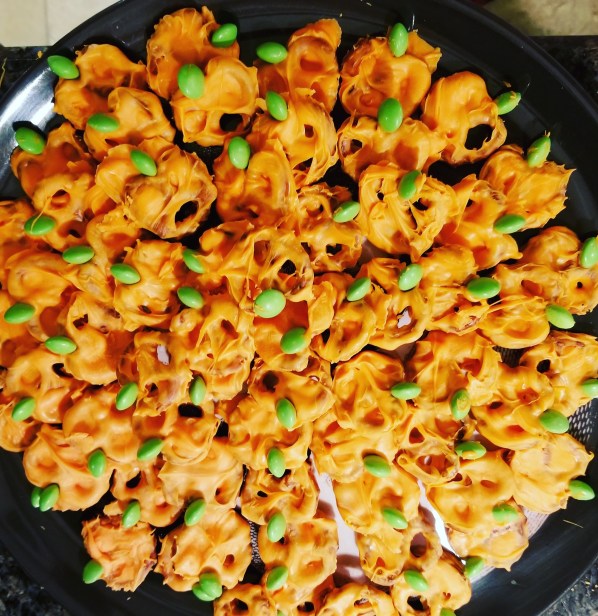 Learnings, wonderment, and arguments with the kids aside, I am really enjoying this time with them. It solidifies my decision in leaving my job every time my four year old’s face lights up when I’m standing outside the doors to pick him up from school. He still asks me every morning if I will be there to pick him up.  I’m guessing it’s because he’s adjusting to no longer being the last kid at after school care every day. While this is temporary, I’m not taking one second for granted. I look forward to what I’ll be schooled on next week by J and E!