We said good-bye and the mouse and I hit the road.  I pulled into the cemetery nearby. This seemed like the most viable option in terms of where to set it free. I hopped out of the car, went around to the passenger side, and grabbed the trap. Just as I grabbed it a white pick up truck that appeared to belong to the cemetery pulled up slowly behind my car.

There’s been a mouse that pays us a visit every night at the same time. It starts banging around under the oven making all kinds of noise, however, we’ve never actually seen it. The cat tries unsuccessfully to catch it every time. The other night when I heard more noise than usual, I went into the kitchen and saw the thing standing in my frying pan on the stove! I almost died. I threw on my coat over my pj’s and drove to Home Depot to get some humane traps. The idea of buying a trap that squishes them makes my skin crawl. I’m less grossed out setting a live mouse free, than having to deal with a broken, dead one.

For four nights the trap wound up empty. Then last night I heard the thing squeaking and heard the trap shifting around (unfortunately, I sleep like a cat) and got up to check it. The cat followed me and, naturally, went nuts pawing at the trap. I wandered around the house in a sleepy daze and found a bucket, which I placed over the top of the trap to dissuade my cat from batting it around. This trick would help me get some sleep for a couple of hours, until I woke up feeling sorry for the mouse.

What the hell is wrong with me? Honestly, I felt bad for it because I thought it might suffocate under the bucket. I got out of bed and took the bucket off. This was a dumb move because for the cat- it was game on.

I got in and out of bed two more times from the noise of the cat pouncing on the trap before I put the trap in the basement and closed the door. The morning arrived in what felt like two seconds.  While dropping my third grader off to school, I had the mouse ride shotgun.

“Mom, no fair. How come I can’t watch you set the mouse free? Can’t you just set it free behind my school in the woods?”

“Um, I think it might look extra shady if I was walking behind your school right after the bell rang with a small black object in my hand. Plus the view from the school windows of me crouching down with some black contraption wouldn’t fare well either. I’d likely be arrested on suspicion of wielding a weapon, so it’s really not a good plan hun.”

We said good-bye and the mouse and I hit the road.  I pulled into the cemetery nearby. This seemed like the most viable option in terms of where to set it free. I hopped out of the car, went around to the passenger side, and grabbed the trap. Just as I grabbed it, a white pick up truck that appeared to belong to the cemetery pulled up slowly behind my car. 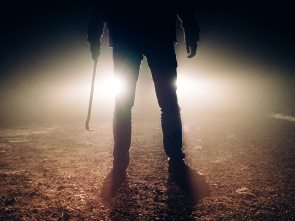 Here I was about to release a mouse in a holy area. I mean, technically a cemetery is sacred and stuff. Also, just a side note, couldn’t the manufacturers make these stinking traps in different colors like bright red or blue or something? They had to be black? Honest to God, it looks like a freaking weapon of some kind. So there I was; suburban mom in my winter coat, yoga pants and sneakers slinking around the cemetery in the rain with a freaking live mouse in a trap that looked like a weapon. It’s funny how we start to act guilty when we feel like we’re doing something wrong.

I had to lose the cemetery worker in the pick up. I felt like he was about to get all  Sherlock Holmes on me.

I chucked the trap back in the car and ran around to the driver’s side and drove away like a bat out of hell. I completely chickened out, it felt like I had to release the mouse in private because I didn’t want to get “caught”.

Driving out of the cemetery I drove past a soccer field. Ah, the perfect place to release a mouse! After turning around and pulling my car into the field parking lot, I noticed one of those bright orange town trucks.

Ugh! For the love of God! Can’t a girl just get some privacy around here to set a damn mouse free? I sat in the parking lot for five minutes or so and waited for the workers in the truck to leave. No luck.

The park was the next best bet. It seemed surreal to me that this was how I was spending my morning. Driving from place to place trying to set a damn mouse free – with some privacy no less! Once at the park, I made the left into the driveway and could not miss  the unmarked black police SUV sitting in the driveway.

This was legit comical! I honestly COULD NOT find one open field/woods/cemetery/park without some truck or utility vehicle standing in my way. It felt like I should prepare to have an explanation in case I was approached.

“Um, sir, I know this looks weird and this looks like a weapon but I’m actually setting a mouse free that I caught in my kitchen. Yes, I actually drove a few miles from my home to set this thing free. It’s what the directions on the box said.” Every scenario I ran through  ended with me cracking up.  It was like I was performing a criminal act that was too comical to explain.

Thankfully, the cop car was facing traffic, and the driveway to the park was somewhat long. The lot runs up against some woods and a creek. I parked and hoped the cop wouldn’t get out of his car to see what I was up to.

The trap wouldn’t open easily and I realized I opened the wrong side and was trying to shake a stuck mouse out of a miniature tunnel. Nothing was happening. I pulled the peanut butter end off and saw some whiskers. So there we were. I was face to face with the high maintenance mouse. This creature seemed more to me like the Princess and the Pea at this point. As I scrambled to take a picture of the thing for my sons, it ran out of the other end through the snow and in between a tree and a rock.

Two seconds after it darted for that crevice, and before I could even pick up the trap, a giant hawk swooped down and landed not five feet from me on a branch. Now, I know you’re thinking, “she’s got to be kidding!”

Nope-I kid you not. It has also been all over the local news lately to be cautious around hawks in the area because they’ve been attacking people.  For real, this is happening, as hilarious as it sounds.

So before the hawk lost interest in the mouse and decided to pick on me, I ran over by my car door and took cover like they do in those police shows (as if the hawk couldn’t just fly over the car door and attack my head). I grabbed my phone and hunched down in between my open door and the car and snapped a photo of this beast.  I really didn’t feel like getting attacked by a hawk today though, so it felt better to cower behind the car door. 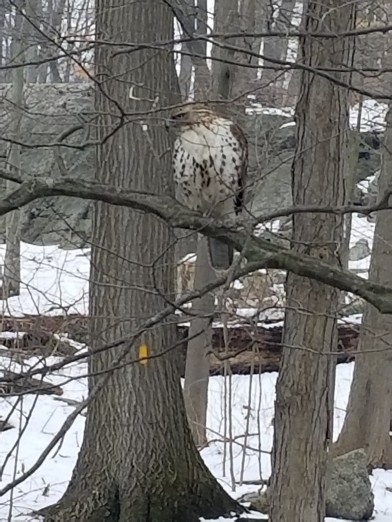 Who knows if the mouse ended up living beyond today after all of this. The irony is that I went through that rigamarole simply because I wanted to do the humane thing and because a dead, squished mouse grosses me out. All that, and the mouse was likely breakfast for that hawk.

The whole drive back home I was dying in the car. What I must’ve looked like to that police officer or any passerby for that matter sends me over the edge.  After all of this, I just have one question. Does anyone else out there actually follow the directions on these mouse traps? Who actually drives two miles from their home to set the mouse free in an open space or field that is not near a residential area?